I totally nerded-out on my snow day.

I spent the day writing a letter to Tim O’Brien– author of my favorite book, The Things They Carried. After some internet recon (sounds more upstanding than stalking) I found that Tim O’Brien currently teaches creative writing at Texas State University.

In 2010, I heard Tim speak at the Philadelphia Public Library. After the event, I was alone with him on North 20th Street. He was about 30 feet away from me, leaning on the library stone, smoking a cigarette.  Fearing I had nothing of substance to say to him, I didn’t say anything. Instead, I put my head down, hustled to my car, and spent the next 9 years regretting not talking to him.

A few years ago I turned our near-meeting into a story. And I spent my snow day turning that story into a letter which I mailed to him. 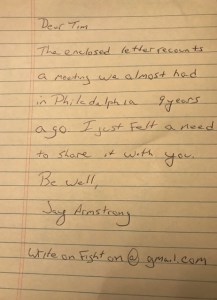 I don’t know what he’ll think about the letter. If he’ll even respond. If it will even find him.

But I had to give it a shot. Take the chance and devote a few hours on a snowy afternoon trying my best to make a meaningful connection.

And sometimes that’s all you can do.

Below is the letter I sent.

Your book, The Things They Carried inspired me to pursue a writer’s life. A novel that entertained me, challenged me, sparked my love of writing, and reinforced my romantic belief that stories have a medicinal power to heal.

I’m standing on the North 20th Street sidewalk and a nasty wind snaps at my shoulders. Holding copy of The Things They Carried in my right hand, I watch you watch the smoke from your cigarette curl and vanish in the cold March air. I take a step forward.

It’s Philadelphia and a Septa bus turns the corner and chugs by. It’s the fifth largest city in America. 1.5 million residents and no one is around. As I tell you this, the night has all the fuzziness of a dream. The lines blurred. The sounds muffled.  But it’s not a dream. It’s real. And it’s me and you alone on the same street together.

A giddy heat rushes up me chest. I step forward.

It’s 2010. I’m 30 years old. So far, my life has gone according to plan. I married my high school sweetheart. We bought a little house in the suburbs. We have a blonde hair, blue eyed daughter. I don’t know it,  but I’m tinkering a tin mythology. I’m not building a life of passion and risk. My life is orderly. My life makes sense.

At 22, after you graduated from Macalester College, your future was smashed. Courtesy of the United States government,  you were shuttled to jungles of Vietnam where you took orders, conducted ambushes, burned villages, kicked corpses, and listened to final screams of men who became suddenly aware of the absolute and unflinching truth that they were about to die.

You fought your unwanted war and now, some 40 years later, you’re staring into an immense Philadelphia sky, smoking a cigarette and still fighting, still trying to make sense of it all.

Of course, I didn’t know it that night, but my unwanted war* was still some three years away.

*In 2013, I was diagnosed with cerebellar atrophy. A degenerative brain condition that affects motor and cognitive abilities and skills.

The wind snaps again and you snuff out the cigarette and sit on a cement step. I’m holding your book and thinking about how to introduce myself like a self-respecting man, not some gushy teenage girl.

It’s peculiar Tim, I didn’t read or write much in high school.  I mean, I secretly liked reading and writing but I had sports to play and girls to talk to. And yet, for no good reason,  I went to college, declared myself an English major and hoped–which seemed much easier to do in those days–one day I might become a writer.

I now understand much of my life has been car ride down I-95 to this cold March night. Gliding along, watching miles click by, never really in control, never full-heartedly doing the thing that I really wanted to do. Never believing I had a story worth telling. Worth reading.

How a circumstance, a smell, a passing glance can rip a chord– cause the past to sputter, growl, zoom into the present, only to stall in your brain in both odd and ordinary hours. 26 feet away from you and I’m suddenly reminded of something my college journalism professor, Dr. Breslin, told me some eight years prior.

Earlier that evening I sat in the Philadelphia Public Library’s auditorium listening to you, with a gravel-rubbed voice and steely stare speak eloquently about writing, the haunting nature of memory, the Vietnam War, the ambiguity of truth, how imagination helps you cope and how storytelling saved your life.

I’m 30 years old. The writer seeds are in me, under the soil,  but I’m not tending to them. I busy living an uninspired life. Your words, your stories help but I’m not ready. The seeds are rooting, slowly, still five years away for producing fruit. Fruit that will ripen when my life spoils. When doctors tell me I might die.

You step from the podium, the auditorium claps, and I exit the library.

I walk along Vine Street, turned up North 20th Street. The library is on my right. You step out a side door of the library and light up a cigarette. You smoke under a yellow lamp light and watch the smoke curl and disappear into the starless night sky.

I freeze. It feels like an odd, cold dream. One of my heroes, a man whose books I would gift to people and attest they taught me more about writing and storytelling than any teacher I’ve ever had, stands 30 uninterrupted feet from me.

I smile and take a step forward. Then another.

I hear Dr. Breslin’s voice warning me to never interview my heroes.

She smiles, walks out from behind her desk and says, “Because you’re never ready to meet your heroes.”

You sit down on a little cement step and snub out the cigarette. I take another step forward. Then another.

From my understanding, after the war you didn’t know what to do. So you wrote. You found solitude and hope and love and redemption in your blue-collar prose. I’m a long way from Vietnam, but my private war awaits– clawing at the edges of my future days– and I won’t know what to do.

I tuck The Things They Carried into my messenger bag and retreat.

I have nothing to say to you. Nothing to provoke meaningful, authentic conversation. Nothing you would appreciate.

I turn away and walk along North 20th Street. With hunched shoulders, I leave you behind, probably forever, yet forever carrying you and your stories with me.

I’m walking into a darkness now.

Meeting yourself on the internet

A note on perseverance

Happy 5th Birthday to us! (and a Facebook fight in an unexpected place)