An excerpt from “The Wink”

Below is an excerpt from a story I wrote three years ago called “The Wink”. The story, set in 1994, recounts a championship baseball game I played in and serves as a tribute to my father. He turns 63 this week. 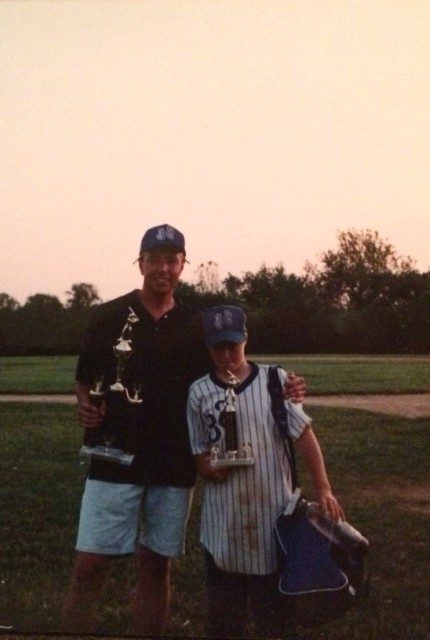 …At the height of the evening’s drama, dad looked down the first base line and into my soul. The sun sank behind the tree line. Crickets hummed. Fingers crossed. All those eyes locked on me– the players, the crowd, the entire cast of 90210. A swirl of voices screaming at me “C’mon Jay” and “You ain’t nothing”.

I felt myself collapsing under the weight of my own adolescences. Failing at 14, on this stage, would be cataclysmic and undoubtedly afford my parents years of monthly psychiatrist co-pays.

Dad knelt and ran his hand across the points of grass. Then, as subtle as the advent of the moon and as natural as the setting sun he winked at me.

I climbed back into the batter’s box, choked up on the bat and shortened my stance. Just like dad had taught.

The pitcher reared back.

The ball tinkled off the bat and rolled toward the dead space between the pitcher’s mound and first base.

I dropped the bat and tore down the first base line. The first baseman retreated to the base. The pitcher leaped off the mound.

Dad was still kneeling. The sun at his back. Helplessly watching his son struggle in a world full of giants.

The evening sky erupted in a collective burst of cheers and moans.

Dad moved in behind me and put his hand on the small of my back and calmly said, “Check your signs.”

I looked across the infield. The Pirate (our 3rd base coach) ran his right hand down his left sleeve.

On the next pitch I took off for second.

I sprinted toward third. The Pirate hopping up and down waving me home.

Things were quiet in the car.

Every so often dad and I would look at each other and smile. Still speaking in signals.

As we rounded the corner and headed home I asked,

I felt the weight of the championship trophy in my hands. The sky shifted into deep purple. Single suburban houses with yellow porch lights flicked by.

Dad looked across the car and said, “Because I believe in you.”

We slid into the driveway. Safe from the scrutiny of the world. Dad and I sat sharing the silence. Smiling at life.

Dad cut the engine. I looked up at him. His eyes moved toward mine.

There were many nights when I convinced myself Write on Fight on would never happen. When I would fall into myself and teeter on the edge of failure.

When I thought it would not be worth the work. When my kids pined for attention or when I couldn’t muster the energy to find a single word that satisfied me. When the blank Word document was as menacing as a strapping pitcher with facial hair and a propensity for destroying twerps like me.

Then sometimes I see a baby-faced 14 year old boy in baggy blue baseball pants standing in the on-deck circle. His head rattling in an oversized helmet. Scared out of his skull. Scared of everything. And I see my father- a young man, strong and proud. He genuflects in the sweet green grass with the sun behind him and he winks at me and admires me the way fathers secretly admire their sons.

Then the pitch comes.

Winning and losing in our instant oatmeal world
A Little Moral Courage (or when your child's teacher emails you)
No Autographs, Please