Why Hamlet Still Matters (Part 1 of 3)

1997. I’m sitting in a stuffy classroom in Conwell- Egan Catholic High School, pretending to listen to my English teacher drone about why Hamlet is the most important play ever written. I don’t remember her rationale and it’s not to discredit her attempt but I was 16 years old and I didn’t care.

I, like most high schoolers, didn’t understand why we had to agonize over a play written over 400 years ago. I remember having to memorize and recite the “To be or not to be” soliloquy. I remember Hamlet and Gertrude’s oedipal relationship and thinking—well that’s kind of weird. I remember everyone dies. And, I remember not being impressed.

I thought that this “great play” was simply about a malcontent 30 something prince who may have a thing for his mother and who can’t make up his mind. I was 16. I was an idiot. 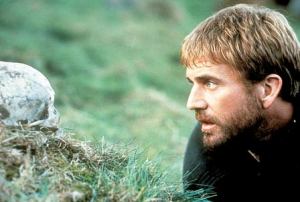 Now– cough, cough– here’s the rub—17 years later I’m 35 years old and indecisive and as the fickle engine of fate would have it –I’m a high school English teacher and I recently began the perilous journey of not just teaching Hamlet but attempting to get my students to understand why Hamlet still matters.

And thus begins my three part blog odyssey on why Hamlet still matters:

Yes, that Pink Floyd. The same trippy British rock band whose sounds have tranquilized college dorms since Timothy Leary started handing out LSD at pep rallies in the tumult of the 1960’s.

When Pink and the boys returned from the dark side of the moon, they began construction on their 11th studio album—The Wall. On the slowly building track six, Mother—a track that captures the albums themes of abandonment and confusion—Mr. Floyd asks his mother, “Mother should I trust the government?” A question, for a few reasons, I found myself mulling over recently.

Hamlet begins with Denmark in crisis. King Hamlet- Hamlet’s father- is dead. And within a month of King Hamlet’s death, the cheeky Uncle Claudius has swooped in, obtained the Danish crown (which contrast to popular belief does have a hole!) and seized Gertrude–his dead brother’s wife and Hamlet’s mother– all for himself.

There’s disorder in the Danish house. Time is out of joint. Hamlet is confused and lonely. Sure his misery stems from his father’s sudden death and his mother hasty marriage, but digging deeper into Hamlet’s desolation, I think it can be fitted to the fact that the he simply can not trust the government– since the government killed his father and married his mother. He’s a man without a country. A sediment that is incredibly modern and incredibly familiar.

History has shown us that in times of national crisis—Pearl Harbor, the JFK assassination, 9/11—it’s instinctual to rally together, stand united behind a common voice, a trusted visage.

In room A205 we began our study of Hamlet on the heels of the Paris massacre and as we analyzed King Claudius’s address to the Danish Court, San Bernardino happened.

As a father and an American citizen I’m concerned. Check that—I’m scared. I’m no political maven and have no desire to be. Maybe I’m getting old, but it seems as if the world has become a powder keg and the American government is doing the Ney -Ney with a gas can in one hand and a semi -automatic in the other.

Citizens have lost trust in the police. Churches and schools are no longer safe havens. And in spite of the recent mass shootings—which we seem to growing more comfortable with- our nation’s gun control remains looser than Gertrude.

Furthermore, I don’t know if there is a democratic shoulder I trust to lean on. The parade of presidential hopefuls seem clownish—Globe theater intermission material. Like Pink Floyd, our leaders are talking about protecting us by building walls, except theirs would be made of concrete and steel not progressive sounds and poetry. Our leaders seem nervous and desperate. Their reassurance seems shallow and manufactured.

Hamlet still matters because in 2015 we are Hamlet. We are unnerved and wary of our leaders. Desperately looking for someone, something to believe in.

“Mother should I trust the government?”

It’s a question Hamlet would surely ask his mother if she wasn’t off bumping uglies with the government.

It’s question I would ask my mother– but since she has expressed her desire to buy a gun– something cute and small, something that would fit in her purse in case ISIS goes hunting for her at Wegman’s–I already know her answer.

Notes-to-self
How to forgive your guilt: A self-forgiveness exercise
As 2020 comes to a close, here's some advice I wish I received on New Year's Eve 2019