This post is dedicated to the look my son gave

These days Santa Claus is a curious subject in our house.

I’m pretty sure my 10 year old daughter doesn’t believe. However her belief, or lack there of, has yet to be confirmed.

And my 5 year old son, with his whole little heart, believes that Santa Claus is absolutely, positively real.

The other night we took the kids to see Santa. Gleefully the 5 and 8 year old went. The 10 year old dragged her Uggs.

So in our puffy winter coats we stood in line. A line that snaked among a row of red poinsettias, a white picket fence, and fake, fluffy snow. 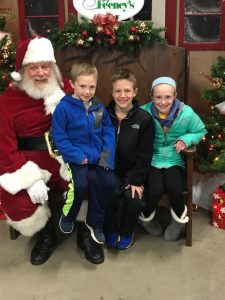 When we heard his voice the kids grew quiet. They tilted their heads around the legs that stood in front of them. His voice boomed again. Their eyebrows raised. Their eyes widened. He is real. He is here. In the flesh. The barrel-bellied, white-haired celebrity had stepped off the screen, out of the books and into their lives.

He smiled, welcomed us forward, and my 5 year old rushed past the older two.

As a parent, it’s sad to know there many subtle moments that go unseen. Little gestures– smiles, scrunches of the nose, tilts of the head that children perform as they discover the world.

It happened as my five year old turned to sit on the red bench next to Santa. My son’s eyes caught mine. His electric blue eyes as big as a pair of moons. A look bigger than life. A look that confirmed everything, not matter how fantastical, was possible. Santa is real. Magic is real. The mythical world was meeting the ordinary world and it was glorious.

When was the last time you looked at life with such joy?

Life distracts us. Our attention falls on the wrong things. On broken things.  And, if you’re a parent,  while piecing your life together, you’re children are seeing the world for the first time and, in a few blinks, will never see the newness of the world again.

In the gleam of his eyes and bend of his 5 year old smile all my convictions were confirmed.

Life, and all its wonder, is unfolding right before me, never to be folded again. And the little moments, the ones we often miss, the ones that are sometimes so hard to see, are the ones that will remind us of how wonderful life is.

How serious am I about this writing stuff?
Making progress (from pole to pole)
52 Reasons to Get Up