I’m watching It’s a Wonderful Life with my son… 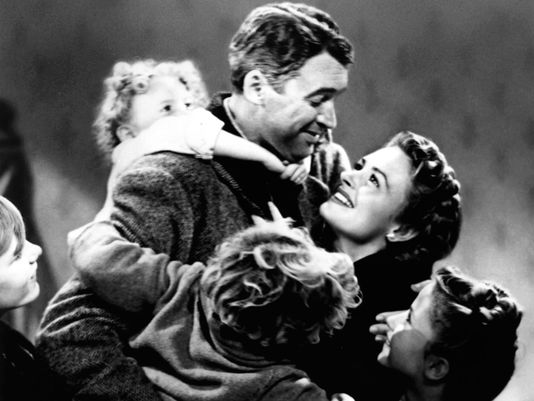 I’m watching It’s a Wonderful Life with my son, Chase, when in between handfuls of popcorn he asks two questions:

Question one was easy to answer but difficult for my eight-year-old son to understand.

I explained that, just like us, people back then saw in color. But this movie was made before color video cameras had been invented, so it could only be filmed in black and white. This caused Chase, a creature of color tvs, color computers, color tablets, color phones to bend his brow and say, “I don’t understand.”

The second question was more difficult to answer, but somehow seemed easier for Chase to understand.

My son didn’t realize that George Bailey stood on the bridge contemplating suicide. George had lost all his money, his business teetered on bankruptcy, there was a warrant for his arrest. Confused and desperate he felt that suicide was the only solution.

Chase has yet to experience the chest-seizing panic that George Bailey felt as he stood on a bridge, looked down at the icy river below, and believed his life was over.

What my son doesn’t understand is that most adults:

Are terrified of embarrassment.

Define themselves by material possessions and financial success.

Focus on the wrongs instead of the rights of the world.

Believe they’re not worth saving.

Believe running from problems is a formidable solution.

Are so nearsighted they fail to acknowledge all the good they’ve done, the lives they touched, and the people who still need them.

Fail to realize problems catalyze growth and that our problems are not nearly as unique as we think they are and that sometimes shit happens and, if we can sit on the pot long enough, we realize we have the ability and resources to clean it up.

But you can’t say that to eight-year-old. You’d give him nightmares.

So I just turn and say, “George wants to jump off the bridge because he’s sad and doesn’t know what else to do. But he’s forgetting about all the friends and family who love him.”

Chase understandingly nods, reaches into the plastic bowl between us, scoops outs a handful of popcorn, looks at me, and flashes a smile that reminds me how wonderful life is.

How to Cross a Threshold
Are we having fun yet?
"Dad, why is it raining?"