“The Man with the Hole in His Brain”

A man is standing alone and shirtless in front of his full-length bedroom mirror.

He’s 38 years old and knows, with bone-certainty, he’s lucky to be alive–let alone have a doting wife, three lovable children, a warm and spacious house to live, parents who are still alive and still love him, a job he enjoys, food in the fridge and two cars fat with gas in the driveway.

He knows he’s blessed and that his world is a good place to live.

…of course there’s a however. There has to be a however.

I recently taught a fundamentals of storytelling seminar at a local university. I will not lecture you on said fundamentals but your conviction to this story, and to all stories for that matter, hinges on the gravity of the however. However indicates a change, a conflict, a turn.  And if the however is big enough, desperate enough, it may compel people to do two extraordinary things: listen and feel.

Tiger Woods was once laser-focused on his golf game however…

The man in this story, like characters in all stories–whether fact or fiction, has a secret.

He has a good life, one others often envy. And he’s a good man too. Loyal and honest. Quick to buy a frustrated friend a beer and listen to his worries.

However, when he’s alone and shirtless in the mirror he trembles with shame.

He’s ashamed his arms lack the thickness and sturdiness of a father’s arms. Ashamed his chest, sunken and poorly muscled, looks like two deflating balloons. Ashamed his shirt, when it’s on, is more like a pillow case hiding the soft and lumpy pillow underneath.

Five years ago doctors discovered a hole in the man’s brain. A hole that, doctors labeled, “potentially fatal.”

The doctors fed the man a daily diet of steroids and pain medications that the man willfully ingested and, in turn, willfully weakened his all his muscles, not just the ones hidden under the pillow. Soft and stretched, his body looks to be owned by a much older man.

The man stares long enough in the mirror to forget about his good life.

If it wasn’t for bad luck, I wouldn’t have any luck at all, he thinks.  He worries, as he often does, about the hole is brain. Will it get bigger? Will it kill me? Or like a hole on the beach, could the hole in his brain be filled sand, the bottom of a soda can, a broken flip-flop heel? Or maybe it could be filled with more scientific things like neurons and dendrites and axons.

He gets mad at himself, which he often does.

He blames himself, which he often does

He curses the hole in his brain, stares into his own eyes and wonders how his good world would look like without him in it.

Little footsteps rush down the hall and the man tosses on his shirt, turns to his dresser, pulls open a drawer and pretends to be looking for something.

The man pushes around some papers in the drawer.

The youngest child, a boy, almost five with short brown hair, freckles doting his nose and who, when he tilts his head and smiles, reminds the man of himself. “My teacher said that when we lose something we care about we should just keep looking for it.”

The man turns back to the mirror. His eyes are deep blue like the child’s.  Below his soft chest,  beats the heart of a child–boundless and wild. A heart that yearns to play outside again. To run, jump, tackle, and swing. To sweat, to bleed, to get dirty again.  A heart that is much younger then the body that holds it.

However, there’s a hole in his brain. A hole that makes the man cautious, off-balance, and afraid.

The child stops in doorway, turns, “Dad, can you go outside and play with me?”

For five years the man has filled the hole in his brain with excuses and fear.

The man thought when he became a father he would be a big kid. Hat spun backwards, t-shirted ringed with sweat, playing in the backyard with his children on a hot Saturday afternoon.

“Not right now.” The man winces at his boy, “When I’m done looking for the thing I lost.”

The boy looks up and appears older then when he crossed into the room, “Dad, keep looking. I know you’ll find it.” The boy leaves and the man thinks about all the big things adults spend their lives trying to hide.

The backdoor opens then closes.

The man moves to the window, looks down, and sees the child, alone, kicking a soccer ball in the backyard.

Catching his reflection in the window’s reflection, the man pledges to his faded self to do something this summer to fill the hole in his brain so he could one day play with his child in the backyard again. 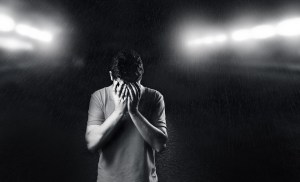