7 Reasons Why My Child is a Suburban Dictator

You’re looking a menace. A television hogger. A fickled eater. A picky dresser. A mess maker. A bed jumper. An interrupter of conversations. And a careless pisser.

You’re staring into the soft but tyrannical face of a suburban dictator. 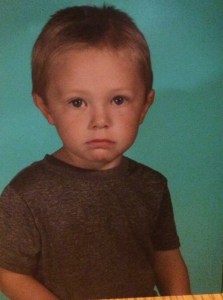 This is my youngest child, Dylan. He is 3. And if you let him, he will rule your world.

But here’s the thing…he’s so freaking cute and I absolutely love him. And damnit… he knows it.

His rendition of “10 Little Monkeys Jumping on the Bed” will puddle you to pudding. His little baby blue eyes will mesmerize you. His smile will slay you.

Dylan’s teacher describes him as a “delight”, a “joy” and a “fabulous little listener.”  His mom-mom calls him a “heartthrob.” And Jean, the friendly Shoprite cashier lady, vows to “gobble him up” every time she sees him.

In true dictator fashion, Dylan is public charmer, a seducer. He possesses the deadly combination of personality, looks and a slight lisp that weakens knees, melts hearts, crumbles democracies.

And the scary thing is, even at 3, he knows he wields a mighty sword.

At home Dylan is known as King Dyl Pickle (the fateful nickname I gave him a few years before his hostile began takeover.)

He knows his smile grants him the keys to the kingdoms of suburbia.

He’s a usurper in Underoos.

Last night, KDP was marching around the house demanding a bowl of Scooby Snacks.

Cindy and I exchanged a familiar worn out look, a “whose idea was it to have another child” look as KDP marches, commands and demands.

Cindy sighs, submits and fills KDP’s bowl with the requested Scooby Snacks. She knows if she doesn’t the next few hours will be absolute hellish, punctuated with timeouts and temper-tantrums and tequila ( ok not tequila, its a week night… I just really like alliteration).

But before you lay judgment upon Cindy and I, please remember sometimes parenting isn’t about instructing and leading and teaching. Sometimes it’s simply about surviving.

So after a week of dictator research (while listening to Hallelujah)  here are 7 reasons why I’m convinced Cindy and I are living under the reign of pint-size dictator.

Reason#1 Dictators tend to speak, scream and rant louder then everyone else until you can no longer ignore them.

Reason#2  Dictators do not tolerate opposition.

Currently, KDP’s favorite line is, “Because I said so.”

Cindy and I shudder at the thought of taking KDP to the likes of Target. A simple trip  usually results in him flailing about on a dirty linoleum floor because I’m refusing to buy him strawberry Pop-Tarts

Reason#4  Dictators can be charmers.

“Daddy, can I have some candy now?”

“No timeout. You go to timeout Daddy. I want candy!”

While holding himself and running in place KDP announces, “I don’t have to go potty.”

At his last pediatrician appointment KDP was measured in the 25% percentile for height. And if my research is accurate, Napoleon also had an affinity for Scooby Snacks.

Dear reader, I appreciate you reading however, for my own sanity and safety of all suburbia, I ask that you do not mention any of this to KDP.  Dictators are known to have very little tolerance for dissonance.

The Write-a-Thon Donates $200 to the Special Olympics of Robbinsville, New Jersey
What nature teaches us about ourselves
Don't give up.