When I was 13 I was expelled from a weekend religious retreat.

Apparently, at this specific retreat,they frown upon politely excusing yourself to the bathroom, punching out a window screen, hopping out the window and spending the duration of the mandatory evening prayer service adventuring through a nearby woods.

23 years have passed since my great escape and in some ways I’ve grown up– my pension and life insurance policy say so.

And yet as I tell you this– seeing the 13 year old version of myself, sporting a backwards Phillies hat, standing on a church bathroom toilet, sweating and panting like he’s some soon-to-be sacrificial suburban pubescent whose only means of escaping impending death is by punching out a window screen– still makes me, the 36 year old suburban with the pension and life insurance policy, shake my head and laugh.

Ask my parents–I was never a bad kid. In fact, mom often says I was the easiest of her three sons to raise. But there’s always been a twinge of cheeky curiosity in me. Nothing malicious or dangerous– just a desire to test limits, to have fun, to see what would happen– like tossing a few Baby Ruth bars into a hotel swimming pool or tailgating my friend going to work on a cold Monday morning. (This is a delicious venture I highly recommend. It’s simple– pack your car full of stuff you’d need to tailgate a football game–a grill, meat, cheese, beverages, a lawn chair, a radio and a foam finger– and head to your friend’s house an hour or so before they go to work. Set up a “hooray you’re going to work today” tailgate party outside their front door and cheer them on as they prepare for the daily grind  all while you enjoy bacon and eggs on their front lawn.)

So where did this cheekiness from? I’ve got to blame Hollywood on this one. 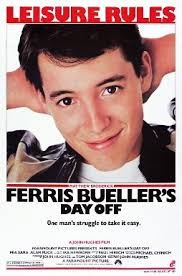 Particularly,  Ferris Bueller. I will assume you have seen the 1986 John Hughes’ classic Ferris Bueller’s Day Off.  If you haven’t shame on you. Seriously, your grounded– two weeks and don’t you dare go near that bathroom window.

I also wondered if the 47 year old Ferris lives with the same moxie as the 17 year old version did?

We can only hope.

In preparation for the article I did some research. Okay, I watched Ferris Bueller’s Day Off again. And you know what–it’s still funny and endearing and when I grow up I still want to be Ferris Bueller.  Why?

I think  Ferris embodies our best self. He’s daring, courageous, self-assured and knows how to have fun.

1. Have courage to speak your mind

Ferris’ best friend Cameron, is a self-deprecating hypochondriac who is afraid of conflict, of standing up for himself. However, after their day off together Cameron decides to confront his greatest fear– his father.

You go Cameron! Look, the grind of adulthood wears us down, beats us into submission. We quickly grow old and weak and passive and voiceless. Defending your ideologies takes energy and courage. But what Ferris taught Cameron (and us) is that if you don’t speak up, if you don’t challenge the source of your frustration you will be continue to be a prisoner of your fear .

Adulting is a full time job. And sometimes we just need a damn day off. To recharge, to regain perspective. It’s surprisingly easy to forget that life is meant not to be won but enjoyed.  We get so caught up in this silly rat race that we often need to be reminded of Ferris’s most famous creed…

.Life moves pretty fast. If you don’t stop and look around once in a while, you could miss it.

We were born confident. As little tikes we were unafraid to chase down what we wanted. Then we grew up and become self-aware. We endured criticism and quickly lost that in-born confidence. Adults are masters at second- guessing themselves for fear of being wrong, for fear criticism.  Ferris Bueller personifies confidence. He trusts himself and his ability to execute his day off. Ferris reminds us that if we can regain our self-confidence– our challenges become less daunting and the Principal Rooney’s  become less scary.

Not that I condone fascism, or any -ism for that matter. -Ism’s in my opinion are not good. A person should not believe in an -ism, he should believe in himself. I quote John Lennon, “I don’t believe in Beatles, I just believe in me.” Good point there. After all, he was the walrus. I could be the walrus. I’d still have to bum rides off people.

My favorite scene in the film is the famed parade scene. It’s here where Ferris decides to hop on a parade float, grab a microphone and sing Twist and Shout. By the end of the scene, all of Chicago is singing and dancing along with Ferris. I’ve learned that spontaneity is another thing adults don’t do well. We grow into planners and pragmatics. But if we can get past our fear (and our lameness) we can be spontaneous and experience great moments of aliveness.

5. Be a righteous dude

He’s very popular. The sportos, the motorheads, geeks, sluts, bloods, wastoids, dweebies, dickheads – they all adore him. They think he’s a righteous dude.

With the exception of Principal Rooney (and his sister who eventually comes around), everyone loves Ferris. Why? Because Ferris looks out and does favors for all people. He listens to all people (even freshmen), which in turn makes people feel valued and appreciated. It’s Peopling 101. Ferris gives everyone his best self, which requires two simple things–empathy and effort. Two things adults struggle with but the precocious, school skipping kid from Chicago continues to do exceptionally well.

So...when do we become adults?
Introduction to "Bedtime Stories for the Living"
Seven years of bad luck