Getting Schooled By My 5 Year Old

Cindy and I decided today, a mild February afternoon, to take the kids up to the local park.  So the kids mount their bikes and Cindy inflates the basketball and challenges me to a game of Around-the-World and of course I accept.

At the park we offer Haley (7) a dollar to watch Dylan(2) on the playground so Cindy and I can keep laser focus in our attempts to stake claim as Around-the-World World Champion.

Chase, who is currently playing instructional basketball, asks if he can play. We tell him he can as long as he plays by the rules– because we Armstrong’s take our basketball seriously.

The game is ugly. A soundtrack of bangs and clangs.

Cindy and I slog our way around- the- world missing more shots than we make. We blame age, the sun, the wind, Donald Trump, gluten-free diets and our canvas shoes. We punctuate our frustration by slamming the ball. We search the heavens for help,  for the ghost of Pistol Pete Maravich. We don’t say it but we sense it –the notion of giving up and moving on with our lives. All the while Chase continues to shoot and continues to miss.

Eventually, I let Cindy win.  (I’m fully immersed in testing the bumper sticker theory of Happy Wife = Happy Life but that’s a blog for a different day). And secretly we are both relieved the game, the torture, is over.

Yet in spite of constant failure and  bodily harm he seems unfazed. To me this was a matter of sheer physics– a 35 pound boy just cannot generate enough force to muscle a 22 ounce basketball through a 10 foot high hoop.

For awhile  I stand by him, encourage him, feed him passes, offer him some shooting techniques and he continues to fail. Then I look at my phone. Check the time. Check Facebook. I think to myself “come on, kid give up” and Cindy gives me the “are you ready to go?” look. I tell Chase that he’s just too small for the big net and that maybe in a few months he’ll be strong enough  to…and he shoots me the– “shut up dad” look that he will certainly verbalize a few years from now.

I encourage Chase to give up by  offering him an alternative– that I’ll take out the little net at home so he can finally score. To which he barks “No!”

I grow tired of watching my son fail and move to the bench.  Haley and Dylan 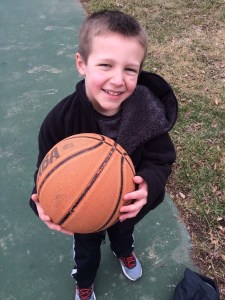 begin to whine. “I’m tired, I’m  thirsty, I’m hungry “. I pry Chase again. And again he tells me he’s not leaving. Finally, Cindy, Haley and Dylan begin to walk home and I agree to stay  with Chase for a few more minutes.

Then something as unexpected as adulthood happens– my son makes a basket. This little kid who had just failed for close to an hour is standing under the basket– arms raised in victory and sporting  a smile that reminds me of a younger version of myself. And with his hands in the clouds he says, “Dad, now we can go home.”

On this fine February afternoon I wasn’t looking to be humbled–and I guess we rarely are. I was looking to get a some exercise and beat my wife in Around-the-World so I could brag about it later at dinner. But my son, the stubborn little five year old who openly picks his nose and occasionally wets his bed just schooled me on the importance of perseverance.