Going back to Bethesda

I started writing this post in a hotel room in Gaithersburg, Maryland.

I’m thinking about the last time I was in Maryland–three years ago. How I had so much too say. So much too write. And how sometimes going back to a place that haunts you is the only way to find peace.

Today I am in Maryland with Cindy and my sons Chase and Dylan. Chase’s soccer team is playing in the Bethesda Premier Cup Tournament.

But three years ago, in the long year of 2015, Cindy and I visited the National Institute of Health in Bethesda, Maryland about 12 miles south of Gaithersburg.

Cindy and I left Philadelphia on a cold Sunday night in November. On Monday, I was being evaluated by a team of six neurologists at the National Institute of Health because the Philadelphia doctors didn’t know what else to do with me. They found the hole in my brain but couldn’t fill it with an answer. I was a medical reject. A puzzle with a missing piece.

NIH is the American epicenter of rare and uncured diseases.

The sprawling campus is wrapped in an iron-rod fence, carved with long winding driveways lined with high trees and decorated with big, expensive stone buildings.

The waiting room door opens and enters a man in a wheelchair being pushed by a thin woman.  The young man is wearing navy blue track pants, a white t-shirt and he’s folded in half. His chest pressing on his knees. Like he’s looking for something he dropped. Like the unseen hand of God is pressing down on the middle of his back.

I paged through a magazine, not reading the words, trying not to look at the folded man as the thin woman whispers in his ear.

Cindy’s hand cups my knee as if to say I love you.

I want to tell her I want to write all this down.  But I don’t tell her. I don’t write any of it down.

Because I’m afraid. Because I’m years away from finding and forming the right words.

And because right now, I can’t stop staring at the folded young man and the thin woman sitting next to him. Her white-knuckled fingers are tightly laced and lay on her lap. Like she’s deep in prayer. Like she’s holding her and the folded man’s world together with all her earthly strength.

I shift my weight and ask myself, what am I doing here?

In 2015 I didn’t know self-pity makes you bitter and weak and unable to appreciate the life that touches you.

I didn’t know the six neurologists wouldn’t be able to figure me out and that hole in my brain would remain a mystery.

And I didn’t know that three years later I would return to Bethesda however, this time I would be standing of the sidelines, with the sunlight streaming through the trees and stretching like fingers across the field, helping coach my son’s soccer team to a tournament victory.

A little cold, a little damaged, yet happy to be alive in Bethesda. 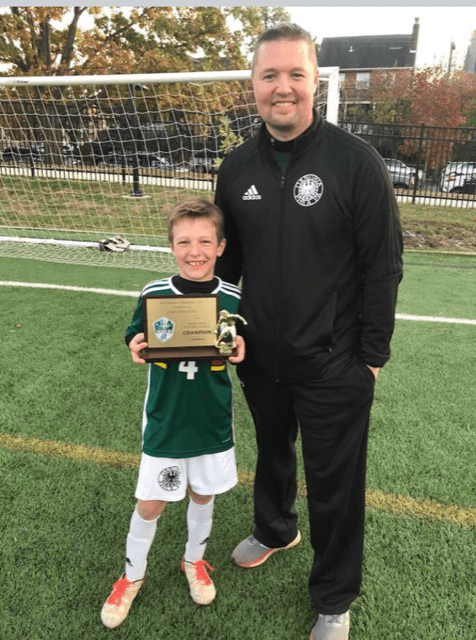 We are all connected
Do you believe in signs?
12 Lessons Learned in 2021