For my 38th birthday, my mom surprised me with a three week subscription to Purple Carrot.

Purple Carrot is a vegan, meal-in-a-box company that delivers-to-your-door all the necessary ingredients for preparing and cooking a nutritious, plant-based meals.

You simply unpack the food from the box, follow the easy 6-step instructions and in 30 to 40 you have a fresh, restaurant quality meal.

When I married my wife I assumed the role of cook.

(For health reasons, 8 months ago I baptized myself in coconut milk and converted to veganism. My family are not vegans, so most nights I have to cook two dinners– one for them, one for me.)

I stake myself as a good cook. I’m fairly confident in the kitchen. Yet what I do lack in culinary flair, I make up in my ability to uncanny ability to read a recipe.

On this night I attempted to cook Purple Carrot’s “crunchy and lightly-browned” Eggplant Mousakka.

Mousakka is a Greek dish. A casserole layered with eggplant, crushed tomatoes and topped with a creamy tofu spread. 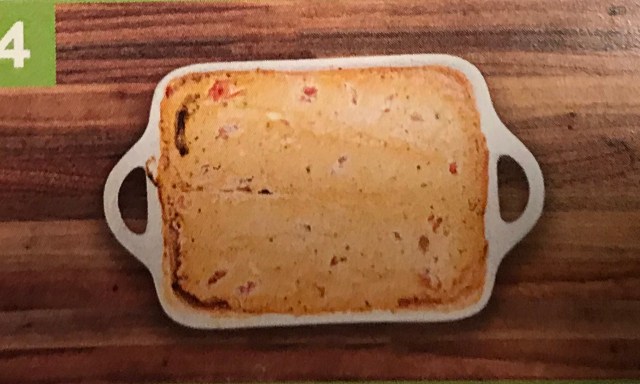 I went to work.

I peeled and sliced the eggplant into 12 silver dollars pieces. I then dropped the tufu brick along with finely chopped garlic, smoked paprika, dried oregano, a pinch of salt, a dash of pepper into a blender and blended until it was all one smooth dream.

Next, I browned the eggplant in a hot sea of olive oil. When the eggplant was crisp, I removed the eggplant with a pair of tongs, layered the bottom of a Pyrex baking dish with the eggplant, added a layer of crushed tomatoes, added another layer of eggplant and topped it with a smooth layer of the tofu blend.

I popped it in the oven, set the timer and waited.

Real good. So good that my chicken tender children remarked how good it smelled.

Twenty minutes later, when the timer sounded, I slipped on an oven mitt,  opened the oven, retrieved the Pyrex dish, removed the foil and found this: 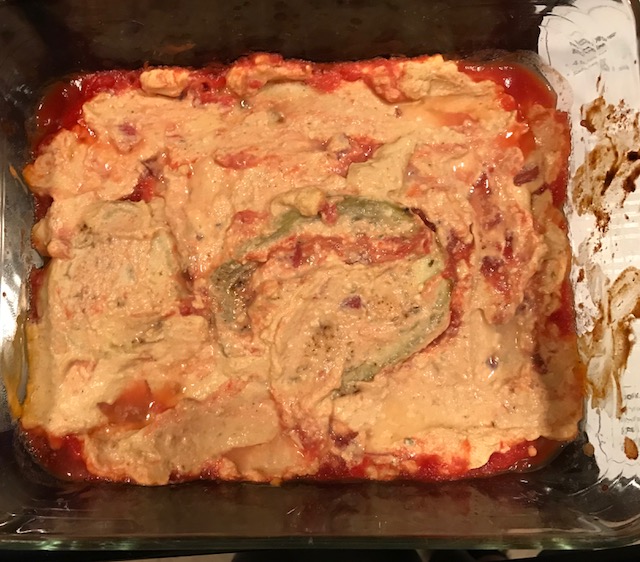 Before anyone could catch a glimpse, I threw the tinfoil back over the Pyrex, cuffed the edges and forced the monstrosity back into the dark oven for another 5 minutes.

For the next 5 minutes I guarded the oven, spatula in hand.

I was there to prevent anyone from looking the big oven window and, god forbid, if the eggplant monster smashed through that big oven window I was there, like a Royal Guardsman, armed and willing to protect my family.

When the timer sounded, I slid on the oven mitt, removed the dish from the oven, uncuffed the foil and found this:

I tried to convinced myself–“Maybe it tastes better than it looks?”

Because it looked awful. So awful, the kids remarked, “That looks awful.”

I read the recipe out loud and as my index finger drew imaginary lines under each word.

I went outside to the trashcan and fished out the original box the meal came in, looking for an ingredient, the one I clearly forgot to add.  The one that would surely make my Eggplant Moussaka look like the one in the picture.

The box was empty.

I moved back inside, to the kitchen, to the counter, looked down at my eggplant abomination, took a deep breath and concluded that I did something wrong.

I scooped out an eggplant wheel and dropped it on a plate. Feeling the eyes of my family on me, I forked a wedge the eggplant, said a quick prayer and slid it into my mouth.

They watched as I chewed, then swallowed.

I ran a napkin across my lips, leveled my eyes and said, “No. It’s awful. It’s really awful kids.”

It’s such a sobering moment, especially for us adults, when our final product fails incredibly short of our imagination.

When we Ziploc creativity, vacuum-seal boldness, tritely follow directions and yet still we fail.

It’s as if everything we learned about achieving success, whether in the kitchen or in life, was suddenly compromised.

I did what I was told, followed the instructions and still I failed.

And in the end, you can only stand over the kitchen sink, force Dr. Frankenstein’s Eggplant Moussaka down the drain with a kitchen brush, listen to your stomach growl and realize you’re not as good as you once believed.

2016 -- A Year in Review: Questioning, Writing, Wearing the Ugliest Sweater I've Ever Seen and Cele...
The Man with the Hole in His Brain-Chapter 2
People Do Care 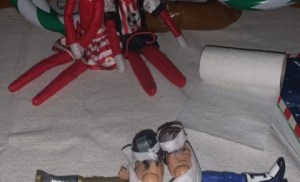