When I grow up I still want to see the world through childish eyes.

A few days after writing Advice from the Dead, Chase and I were in the car together. I’m driving, he’s tucked in the backseat and it’s raining.

Stories like this are almost always punctuated by weather.

With the windshield wipers on full tilt, a rumble of thunder rolls overhead and flash of lightening splits the night sky in half. 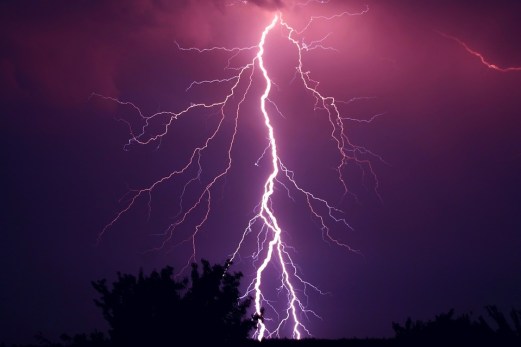 “Dad”, Chase says, “did you know when there’s thunder and lightning God is bowling in heaven.”

“How did you know that dad?”

“Well, I went to catholic school just like you buddy. And my teachers told me the same thing.”

Call it telepathy, call it being a parent but I felt the questions forming like thunderclouds in his head. He’s pondering the angles of time. He’s attempting to comprehend the news that I was once a kid like him, unsure and curious, sporting a catholic school uniform, sitting quietly with folded hands as the teacher educated us on things like God and heaven and bowling.

The car eases to a traffic light and stops.  The rain falls hard and heavy.  The windshield fogs at its edges.

“Dad, do know who the Ultimate Warrior is?”

( Clearly, not the question I was expecting.)

The first person I ever really knew who died was my grandmother. I was 16 when it happened. I remember not thinking much about her death. In a way, I guess, it made sense. She was old and sick and she died. And that was that.

I catch Chase in the rear view mirror. His knees pressed against his chest, feet up on the seat, his oversized eyes watching the watery glow of street lights and store signs flick by. I’m envious. His little life unbounded by theories of time, of the unnerving truth that I will one day die and won’t be here to answer his questions.

The light turns green and we go.

The second person I knew who died was a close family friend, Joey.  One night, for reasons still unknown, he hung himself with his karate belt in the bathroom. He was 12. I was 18. He was a happy and popular and had blonde hair then he was dead.  I remember my dad, with wet eyes and strained words, explaining what happened, clearing his throat, working out the details. I remember saying I was fine. I remember going to school.  I remember sitting in history class, staring out the window watching the morning bloom into its becoming and imaging what it must be like to be dead. Was it like my grade school teachers said? Was it peaceful and warm? Was everything italicized in gold?  Was God even there? If so, would he greet me? Would we go bowling? If so, would I have to bring my own shoes or does heaven have a shoe rental counter?

The engine shifts and we pass the plastic heavens of suburbia– Target, Starbucks, Chick-fil-A.

I was curious. I wanted to press the conversation. I wanted to know what my child knew about life, about death.

“Hey Chase, do you know what happens when you die?”
“What?”

“So dad, is the Ultimate Warrior in heaven?”

“Because when you’re in heaven, you’re not sick anymore and I know sometimes you’re sick. That’s what mom says. So if you go to heaven you’ll feel better, right dad?”

“But if you’re in heaven than you can’t take me to my soccer games.”

We merge onto the highway and the engine shifts and we race under an overpass and things get quiet, the rain stops and I digest the absoluteness of my son’s declaration and I breathe and feel the spinning wheels, the pulsing engine and the car charges toward the waiting darkness and there’s an explosion of thunder, a slash of lighting and just before we exit the quiet of the overpass, Chase calmly says, “But dad if you’re in heaven you can meet the Ultimate Warrior. And then you and the Ultimate Warrior could go bowling with God.”

Beyond the brim of the overpass there looms thunder and lightning.

Before we blast headfirst into the storm I squeeze the steering wheel, stiffen my wrist, catch Chase in the mirror again and lacking something inside–maybe courage, maybe conviction to challenge his young beliefs lean my head back, brace myself for what’s to come and simply reply, “I hope so buddy.”