What My Stand-Up Comedy “Career” Taught Me about Fear 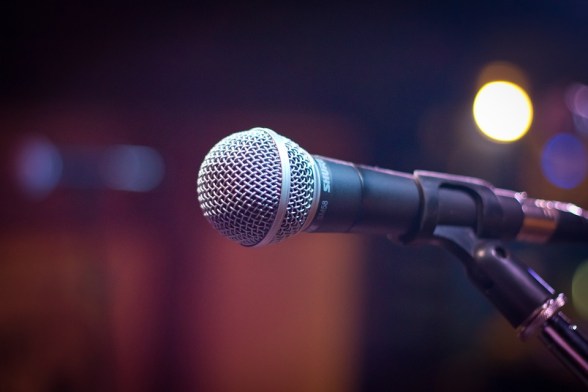 It’s 2005 and I’m sitting at the kitchen table leafing through The Philadelphia Inquirer. Mom is at the stove whipping eggs. The coffee percolates and the TV weather man urges us to keep the umbrellas handy.

Mom whirls around, offers me a plate of bacon and eggs and tussles my hair. I’m 25 and in a few weeks Cindy and I make settlement on a little house to start our little lives together.

It’s a scary and exciting season in my life. And as seasons go, you never understand their significance until many seasons have passed. Until you realize that your past experiences were preparing you to deal with future problems.

As I eat my eggs, my eyes find an advertisement in the paper for an amateur stand-up comedy contest for teachers sponsor by Chuckles Comedy Club. The contest boasts a $1000 grand prize and the honor of being crown “Philadelphia’s Funniest Teacher.”

It happens to all of us–when the gleam of a possibility arrives we’re electrified by the “What if…?”. Our heart quickens, our speech is fast and light and our imagination is seduced by the promise of grandiose achievements.

I see my name in big black letters stamped on a glowing theater marquee. Jay-Z is standing behind a microphone. He calls my name and “Big Pimpin” breaks over the speakers that causes a thunderous cacophony of applause and screams and women faint and men nod in respect and admiration as I saunter across the glossy stage. There are fireworks and acrobats. Beyonce is there.  I’m standing behind a microphone basking under a solitary stage light. My jokes inspire walls of riotous laughter that roll in like waves. I smile, my eyes glint in the spotlight and as I slide my hand in pocket I realize that I’m the envy of everyone in the room.

I snap open my flip phone (remember it’s 2005) and dial but before I punch in the last number something happens. Something always happens in the moments before you leap, before you dive into an unknown world.

“What if no one laughs?”

A nervousness flutters in my stomach.

“What if I’m booed off stage like B Rabbit the first time he’s at The Shelter?”

I see the black letters of my name melting like wax on the marquee. I’m on a glossy stage, behind a microphone, under a column of light. My eyes are wide, darting. I open my mouth but nothing comes out. I’m sweating and shifting my weight and there’s silence. A hard, loud silence that you feel more then hear. I look to my right and Jay -Z storms toward me, stops and pegs me in the ear with Beyonce’s sparkled stiletto. The spotlight clicks off and I’m alone on stage, cupping the side of my head, drowning in silent darkness of my failure.

I’m looking at the incomplete phone number and I feel the Four Horsemen of Failure: Concern, Doubt, Distrust, and  Fear charging hard towards me.

I tighten my lips, snap close the phone, finish my eggs and convince myself it was a dumb idea and I would’ve failed miserably and I’m better off not risking the embarrassment.

For the next few days, between eating eggs and packing boxes I was gnawed by the familiar “What if..?” paradigm.

“Don’t be too timid and squeamish about your actions. All life is an experiment. The more experiments you make the better.”– Ralph Waldo Emerson

And then, hours before the sign-up deadline, in a fit of either insanity or brilliance, I simply thought, “Fuck it. Even if I fail, mom will still make me eggs and Cindy will (hopefully) still marry me.”

This time, I snapped open my phone with confidence, punched in all seven numbers, left a message and a few hours later, a gruff voice called me and told me I was to report to Timothy’s Bar and Grill in West Chester, Pennsylvania next Saturday at 8 pm and that I would be the first comedian of the night.  Gruff voice explained that the contest was a single elimination, three round contest. The best comedian advancing each week until the final round.

My stomach bottomed out. A streak of hot panic blazed up my chest.

For the next few days I jousted with the Horsemen. I wrote jokes, erased jokes, and threw out jokes. I watched hours of stand-up which only ballooned my self-doubt. I listened intently to the cackles of my inner critic. I entertained the idea of not showing up. Calling it off. Running away to Mexico. And I was convincing myself I was going to fail and that this simply wasn’t worth the effort or the embarrassment.

Days before the show all I had was a trashcan full of unfunny quips about relationships, politics, drive-thru windows and old people.

I’m 25 but look like I’m 18. In fact, as a teacher I was often mistaken as a student by both teachers and students. So I thought if I filleted my insecurities, if I had the courage to make fun of myself that people may laugh, at me or with me, either way I didn’t care.

So I committed to writing a 3 minute set about my insecurities.

My boyish looks, my fear of Victoria’s Secret and my pubic hair.

I felt that if I had the audacity to talk about the most private of things  in public I had a good chance on winning or at least earn the “Effort Award.”

But then the strangest thing happened– my self-deprecating jokes were not only good enough to win the first round, I road them all the way to the final where (triumphant trumpet sound) I was but crowned “Philadelphia’s  Funniest Teacher.”

I spent the next few months doing open mic nights, earning a little stage time, bombing some nights, killing others but ultimately I decided to hang up the microphone.

12 years later, when I hear the galloping Horsemen I return to the lessons learned that season. I’m reminded that despite my initial fear I didn’t die.

Of course, I didn’t know it at the time but my experience with stand-up comedy was laying the foundation for what I attempt do every week on this blog (without the 2 drink minimum). I attempt to tell my story truthfully, unadorned to entertain anyone who’s awesome enough to stop by and listen.

We often forget we’re just animals in fancy clothes and funny hats. When we sense fear, our primal instincts kick in and we run. But as the smartest animal in the schoolyard, we know that avoiding fear will only compound fear. And we also know that those who avoid risks will spend their entire lives just dangling from the monkey bars.

So…when do we become adults?

Why I Write with Blake Kilgore
For the Philadelphia Sports Fan, Championship Games are Generational
Nobody Cares and Other Truths I Learned During My Two Years of Writing 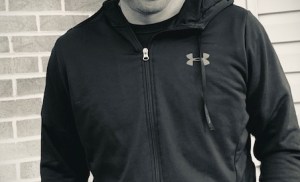