The morning after tragedy

After September 11th, Roth said the story just felt, “meaningless” and trashed the script. And we, the audience, were left forever imagining what could have been.

I imagine Eric Roth woke up on the morning of September 11th excited.  He just finished writing a sequel to one of the biggest, most influential films of the 20th century. He was scheduled to meet film director Robert Zemeckis and actor Tom Hanks later that day.

Maybe Eric Roth had coffee and a grapefruit. Maybe he crossed his legs and read the paper. Maybe a shower. Then, maybe some time staring out the window, imagining how successful Forrest Gump 2 was destined to become.

Everything was normal. Then it wasn’t.

I’m thinking of you Alex Trebek

Our great human flaw is that we think we’re in control.  Often, it’s not until the planes fall from the sky and our great monuments of glass and stone destroyed that we realize how little say we have in all this.

Life is divided into two parts: before the tragedy and everything after.

We all endure tragedy differently. Some of us isolate ourselves. Sink in sadness. Drown in alcohol. Other get busy. Organize charity walks. Open scholarships. Build memorials. Sometimes we busy ourselves to avoid dealing with the pain.

The other night, walking through my neighborhood, I passed the house where a mother and wife had lived, recently died.

As I passed, with my shoulders leaning into the cold March breeze, I saw the husband standing on the front porch with his hands in his pockets as if he was waiting for his wife to return.

I thought of the Forrest Gump script strewn sideways in a trashcan and how many husbands and wives stood on their porch in the morning light of September 12, 2001, waiting for someone to come home.

Everything was normal. Then it wasn’t.

After a tragedy we all find ourselves at the same crossroads: we, the living, must decide if we want to continue suffering or accept the tragedy and find some human way, no matter how slow, to move on.

When tragedy hits everything shifts. Priorities change. The structure of your daily routine dissolves into chaos. You question the meaningfulness or the point of things.

But amidst the confusion and and anger and loneliness we may feel like Roth. We may struggle to find meaningfulness again.

Yet in the frost of tragedy warms the opportunity to make healthy changes that inspire healing, honor the memory of what used to be, and allow us to look lovingly on what will never be again. 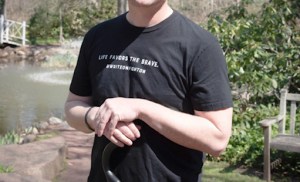