Crossing the Line: The Birth of a Delusional Parent

Chase’s team mans the field. There’s a runner on first base.

Chase is playing second base. He’s got a pair of black socks pulled above his calves, his gray baseball pants are loose in the thighs and tighten just below the knee caps. He’s wearing eye black and with his hat pulled low he looks like he just stepped out of the baseball cards I collected when I was a kid.

A white chalk line that begins at the batter’s box, runs straight through the first and third base bags and dead ends deep in the outfield fence.

The line is to help umpires and players know if the ball is fair or foul.

The line is also to keep parents out.

Parents like me, spongy and creaky kneed, patrol sidelines.

We watch our children and urge and instruct and curse and twist and tense and believe our body language has magical powers to spell the plays unfolding on the field before us.

But there’s danger in such joy rides.

It’s something I swore I’d never do.

It’s a quick bouncer up the middle.

Chase springs to his right, dives, extends left arm and the baseball disappears and the heat rises as if Medford, New Jersey tilted closer to the sun and the right field chalk line dissolves and I’m playing second base and there’s a quick bouncer up the middle and I react, faster then I’ve reacted in years because my body feels fast and strong like a new Corvette and I dive and extend my left arm and the baseball disappears in my glove, its weight cradled in my palm and I land on my stomach and the dirt funnels up my nose and I reach in the glove and with a back-hand toss watch the ball arch into the July sky and land safely in the shortstop’s glove who is standing firmly on second base.

I spring to my feet, dirty and smiling.  I just defied gravity.  I just made eyes pop. I just made mouths say wow. I just did what big leaguers on baseball cards do for a living.

The shortstop slaps his glove across my back as if to say, “Atta boy!”

The coach barrels out of the dugout, crosses the foul line clapping and cheering and announces, “That’s a big league play, son!”

And it was. It was awesome.

My son did. It was all Chase.

I just poured his Frosted Flakes, tied his cleats and drove him Medford, New Jersey.

In the sudden swell of excitement, a line had been crossed.

Between innings as parents reapplied suntan lotion, as the opposing team littered the field and Chase’s team traded gloves for bats and it unnerved me to learn how quickly self-awareness strikes out.  How in the snap of one play I let my mind cross into his body. How quickly delusional parents are born.

Like wading through soup I pushed to nearby shade, wiped my forehead, exhaled and acknowledged that I was hot and a little bothered. 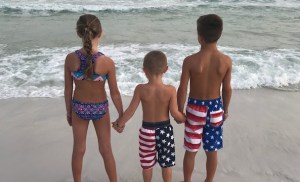 A letter to my daughter on her 11th birthday

Oranges (or raising a 10 year old)